Thyroid problems escalating in the UK

The leading blood testing specialist Dr Quinton Fivelman says 1 in 20 UK adults may have a thyroid disorder. Almost 15% of Covid patients admitted to hospital show previously undiagnosed thyroid problems, while around 1 in 4 over-65s have some sort of thyroid dysfunction. He urges everyone to have their thyroid functions measured annually to avoid problems ranging from depression to heart conditions.
Dr Quinton Fivelman PhD, the Chief Scientific Officer at London Medical Laboratory, is warning that thyroid problems may be escalating rapidly in the UK population and it is likely that there is a direct link between SARS-CoV-2 and abnormal thyroid function.

While the average global incidence of thyroid problems in the population is only around 3%, Dr Fivelman says London Medical Laboratory’s latest research indicates that, here in the UK, about 1 in 20 of us has some kind of thyroid disorder, which may be temporary or permanent.

He says two factors may be at play in the growth of thyroid problems – the Covid-19 pandemic and an aging population. Explains Dr Fivelman: ‘There is growing evidence that thyroid problems are increasing in the community, and particularly among older people and those patients with Covid symptoms severe enough to be admitted to hospital. There is a concern now that these two factors combined may see these numbers climb even higher in the future. In addition, thyroid problems are more common in women than men. A woman is about five to eight times more likely to be diagnosed with a thyroid condition than a man.

‘A recent study revealed almost 15% of hospital patients with Covid-19, who had no previously diagnosed thyroid disorders, went on to develop abnormal thyroid function. A study from the US, also released recently and confirmed by our results, has found that almost 25% of over-65-year olds are now showing some kind of thyroid problem.

‘In the last two years, around 41% of us delayed or avoided medical care such as regular GP check-ups, and we believe there is little doubt that illnesses such as thyroid problems have gone unrecognised as a result.

‘A recent study in Nature, which has been mirrored by the results of London Medical Laboratory’s own blood “MOT” tests, reveal one in four people over 65 showed signs of thyroid problems.

Concerningly, many of the cases picked up in the study were previously untreated thyroid dysfunctions. Most of these patients had underactive thyroids, while a very small minority suffered from overactive thyroids

‘That’s concerning enough but, in the last year, evidence has been building that there is also a link between Covid-19 and abnormal thyroid functions in patients of all ages. And people ill with Covid-19 have a worse prognosis if they develop thyroid problems. 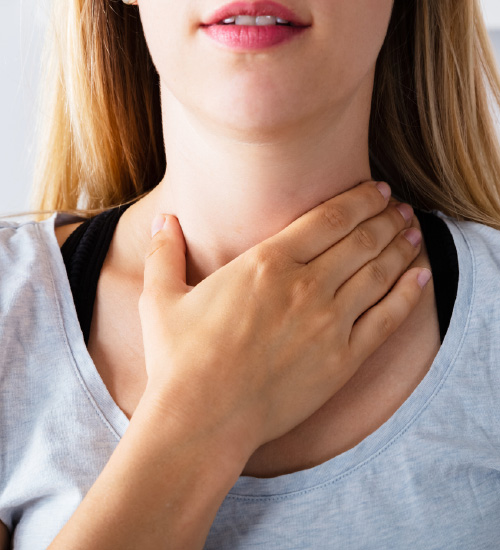 ‘How do people know if they might be developing thyroid problems? The symptoms of an abnormally functioning thyroid can be easy to miss, which is why they may be on the rise without regular GP check-ups.
The symptoms of an underactive thyroid (not enough thyroxine being produced for the body’s needs) are:
Tiredness Feeling cold Weight gain Constipation Poor concentration Depression
The symptoms of an overactive thyroid (too much thyroxine being produced for the body’s needs) are:
Weight loss Heat intolerance Anxiety Sore and gritty eyes Thyroid eye disease (or Graves\' ophthalmopathy), leading to red, swollen or pulled back eyelids or bulging eyes
‘While the explanation for the increase in undiagnosed positive tests for thyroid problems around the world is partially down to missed doctor’s appointments, one new study has shown almost 15% of patients admitted to Queen Mary Hospital with Covid-19 had new onset thyroid dysfunction.

‘Of particular concern is the fact that the more severe the impact of Covid-19 seemed to be on the patient, the worse their Covid-19 outcome became. The thyroid controls the production of free triiodothyronine (fT3) in our bodies. 6% of Covid-19 patients in the study developed abnormally low levels of fT3. Those patients with decreasing fT3 went on to develop severe Covid, leading to the conclusion that people with low fT3 - caused by the virus’ impact on the thyroid - had more adverse Covid-19-related outcomes.

‘The study also concluded that Covid-19 exacerbated the symptoms of people with pre-existing thyroid disease. ‘With this in mind, what can people do to avoid the risk of catching Covid at the same time as developing a thyroid problem? As well as keeping up to date with Covid vaccinations, obvious measures include checking for the symptoms we have listed above and taking a general blood test.

‘The new generation blood tests are highly accurate, and quick and simple to carry out at one of the many drop-in clinics that offer this test. They take around five minutes, with results usually emailed the next day.

Find the blood test right for you