Is ignorance really bliss? Can you afford not to know about your health?

Many of us avoid surgery visits and regular health checks because we don’t want to think about having an illness. But detecting serious problems at an early stage can be vital to the long-term outcome. A yearly blood test ‘MOT’ gives peace of mind if it finds nothing, but can save your life by detecting problems early.
What we don’t know can’t hurt us, right? Actually, that’s certainly wrong when it comes to questions of health.

Burying our head in the sands like an ostrich, rather than facing the truth, is all too tempting; but not being proactive about discovering health problems can significantly reduce the long-term chance of a good outcome.

London Medical Laboratories’ new generation blood tests are highly accurate, quick and simple to carry out. They have already saved many lives, identifying problems people never suspected they had. The tests check for all kinds of conditions, from diabetes and blood pressure to kidney, liver and thyroid problems.

Many of the conditions our Well Man or Well Woman Premier Plus blood tests check for have few, if any, early symptoms. It’s only by taking a blood test that many people have learned they have a serious problem. And quite often the diagnosis has come as a complete surprise.

From marketing managers to famous Olympians, blood tests have saved many lives over the years by spotting issues at a very early stage.

One of the best-known cases is that of Sir Steve Redgrave CBE, the Olympic rower. In 1997, while he was in training for his fifth Olympic Games, Sir Steve grew a little concerned about how thirsty he was becoming. Handily, his wife was not only a GP but also the Olympic rowing team’s official doctor. That meant there were plenty of test kits on hand. The findings of an initial test were backed up by a surgery blood test which confirmed he had developed diabetes.

By discovering the illness early and with help from his doctors, not only did Steve manage to control his symptoms, but he went on to win that fifth Olympic medal in 2000 at the age of 38!

Not everyone is lucky enough to have Olympic training camp medical kits around the house or a wife who is a GP, however.

That’s why Wellness blood tests can help the less athletic of us!

Chira Tochia is a digital marketing manager in her 30s. A few years ago, while she was still a PHD student, Chira developed a benign lump in her throat which had to be treated. After the operation she started annual blood tests to monitor her progress.

Concerningly, thyroid problems could be on the rise. A recent study revealed 13% of Covid-19 patients showed at least temporary abnormal thyroid functions. To put that into context, the average incidence of thyroid problems in the population previously was only around 3%.

Another example is very close to home for the team here at London Medical Laboratory. Our own CRO, Ricky Smith, started to get regular Wellness blood tests following the removal of a tumour.

Ricky’s ‘MOT’ test included measuring his blood sugar levels. A typical reading is around 48mmol/mol or below: Ricky’s level was 162mmol/mol. Says Ricky: ‘I felt so normal but in fact I was at serious risk. Our doctor here took one look at the result and told me I was seriously diabetic. He advised me to leave the office immediately to get treated. He later told me it was amazing I was still standing, yet I had no suspicion I was diabetic.’

By 2030 diabetes cases in the UK will have risen by 50% compared to 2007 levels, according to Diabetes UK. Diabetes is a disease in which people’s blood sugar levels become too high. If not treated quickly, it can lead to heart attacks, kidney failure, strokes, amputation, and blindness.

The first signs that you may have diabetes are that you urinate more often, are frequently thirsty, are often tired, have unexpected weight loss or suddenly suffer from blurry eyesight. Ricky says he had not been aware he had any of these signs. 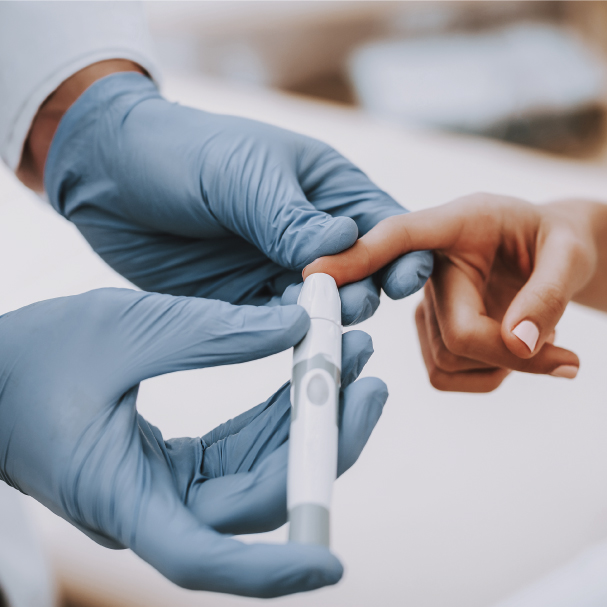 ‘I had a follow-up NHS test which confirmed the result. Fortunately, because it was caught in time, there was no long-term damage. I was able to get targeted medication and I have also made many lifestyle changes. I now exercise and I often cycle to work rather than take the train. I even got a dog to go out walking with! Of course, I also watch my sugar level intake carefully and avoid sugary foods.’
Adds Ricky: ‘I now take a Wellness test every three months and I think it’s money well spent. When I was a bachelor, I sometimes splashed £100 an evening going out and having fun and didn’t blink at the expense, but I never spent any money on my own health. Having a full blood test MOT is the equivalent cost to a night out, but it’s money a lot better spent now I am a husband and father.’

Confesses Ricky: ‘I actually find the tests quite addictive. I compete with myself to get lower cholesterol and blood sugar levels each time. Even though I work in the medical profession, my goal is to keep my medication levels as low as possible through a healthier lifestyle.’

You can visit one of our many drop-in clinics and pharmacies for a full Premier Plus Test, which takes just five minutes. Or you can order online our General Health Profile postal kit that can detect diabetes, thyroid issues, liver and kidney problems and even cholesterol levels and can be done in the comfort of your own home as a simple fingerpick test. We usually email you the results the next day.